We had a layover in Dubai on our way back from India that we decided to extend for 3 days. I was super pumped to see the world’s tallest building and the man-made islands. I remember watching a documentary on Dubai in an art history class in college, and I couldn’t believe I was actually going to experience the most modern architecture in the world.

The weekend started out with a red-eye flight on Friday morning, and we landed in Dubai around 6:30 am. The second we stepped out of the airport hot, thick air hit me like a high-speed train. Seriously I have never been anywhere this hot.

I slid into the comfy leather seats of a luxury sedan, and we made our way out of the airport. We drove on the practically empty freeway as we zoomed past massive skyscrapers of this global city. It was such a stark contrast from India it was almost too much to wrap my brain around. India is raw and real. Dubai felt like a facade dripping in diamonds.

Everything was stunningly beautiful. Endless teal waters and white sandy beaches looked like a picture of paradise. Sparkling glass buildings reached high into the blue skies with white fluffy clouds. 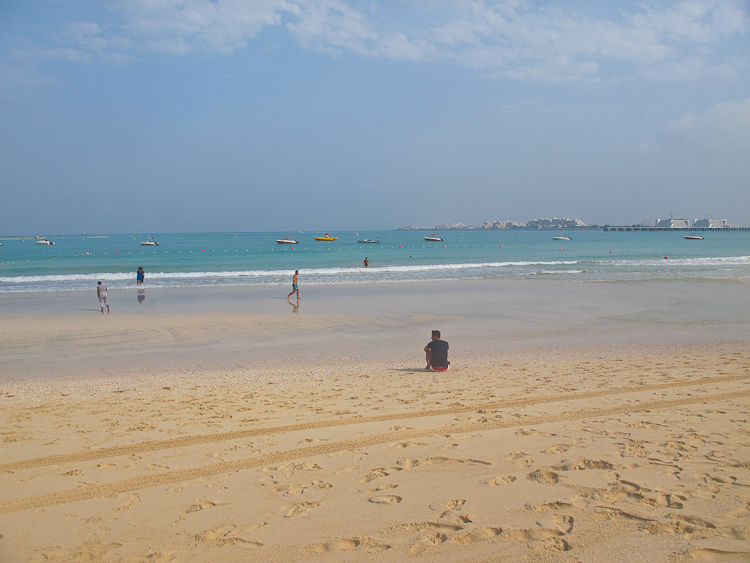 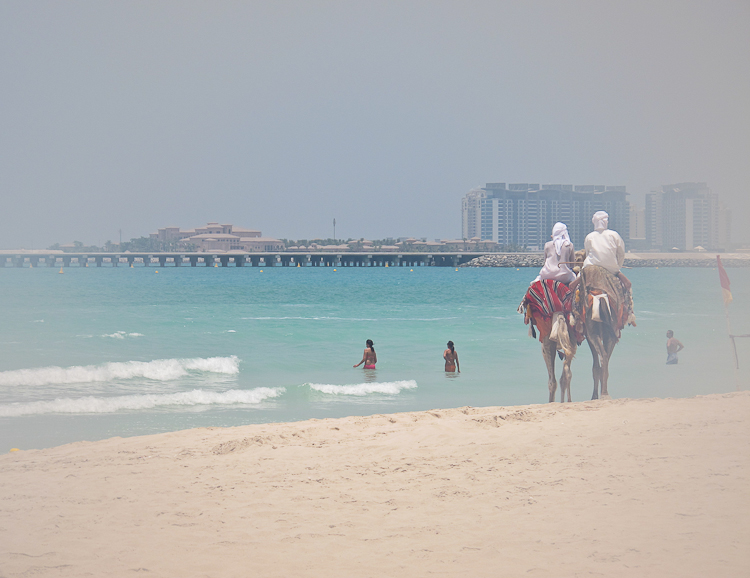 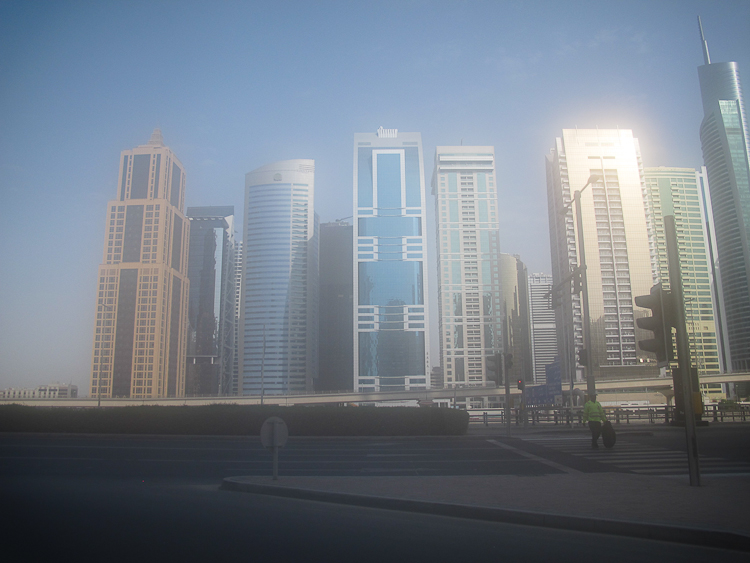 The actual experience was a completely different story. The temperature was always over 105 degrees even after the sun had gone to bed hours ago. By midday the heat index had reached 125 degrees when we made our way down to the beach. It was only a short walk from the hotel, but we were dripping with sweat by the time we reached the sand. We dropped our towels on some nearby lounge chairs and kicked off our flip flops. 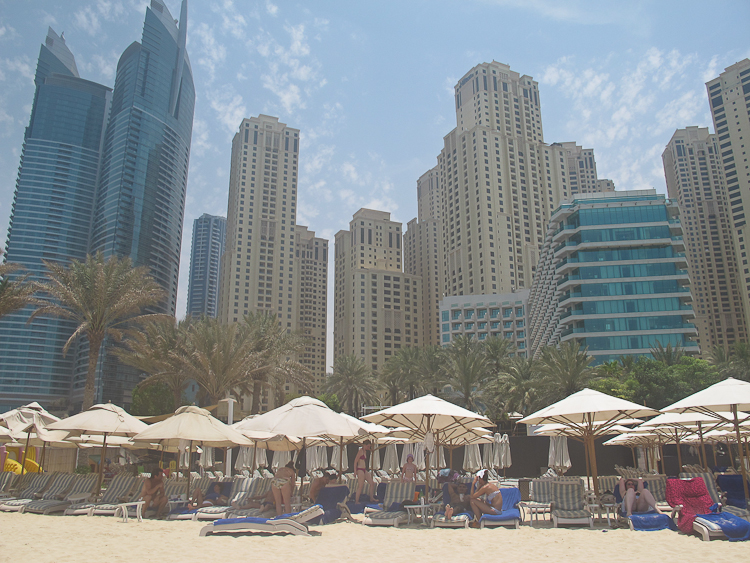 “Okay, let’s just get in the water fast,” as I scampered towards the waves. My feet were calling for some cool water to sooth the burning.

The waves hit my legs and sent my body into complete shock. It was literally like stepping into a hot tub.

I turned to Kevbot with a bewildered look, “How is it possible for ocean water to be this hot?” I felt as if I couldn’t breathe. The heat was stifling. 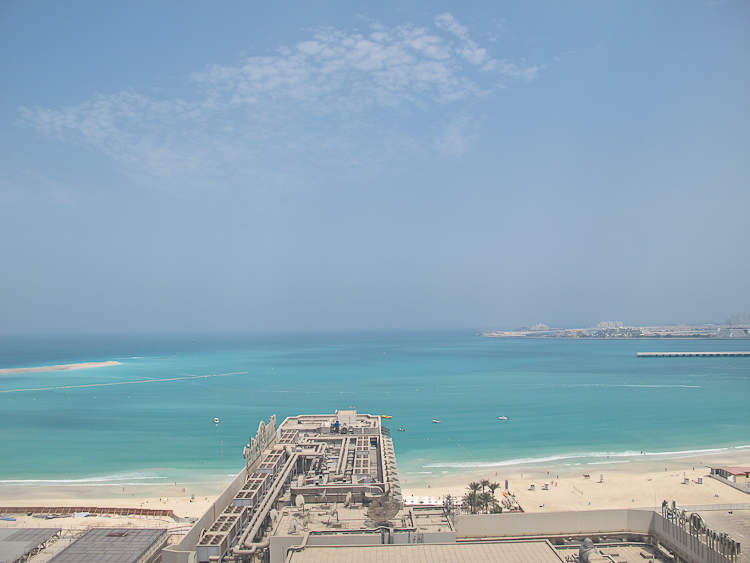 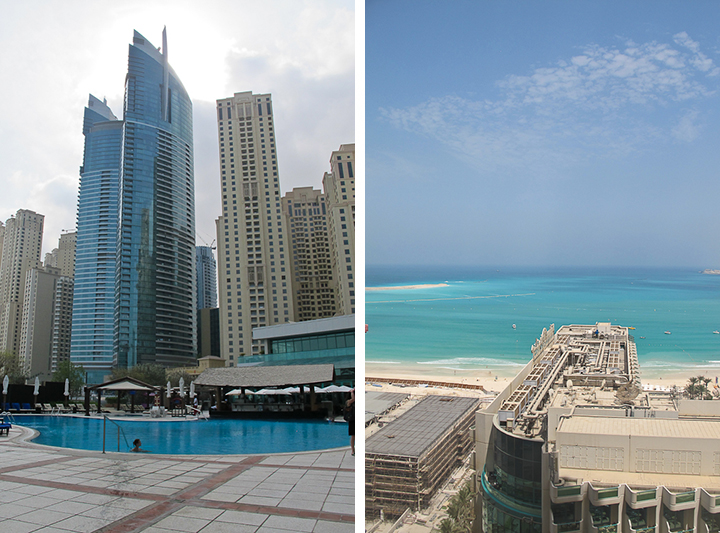 We spent the rest of the day inside our hotel enjoying the air conditioning. I really hadn’t researched or planned activities prior to arriving, so I pursued the internet for things we shouldn’t miss. We booked a spot to see the Burj Khalifa in the next day as well as a Safari in the evening. 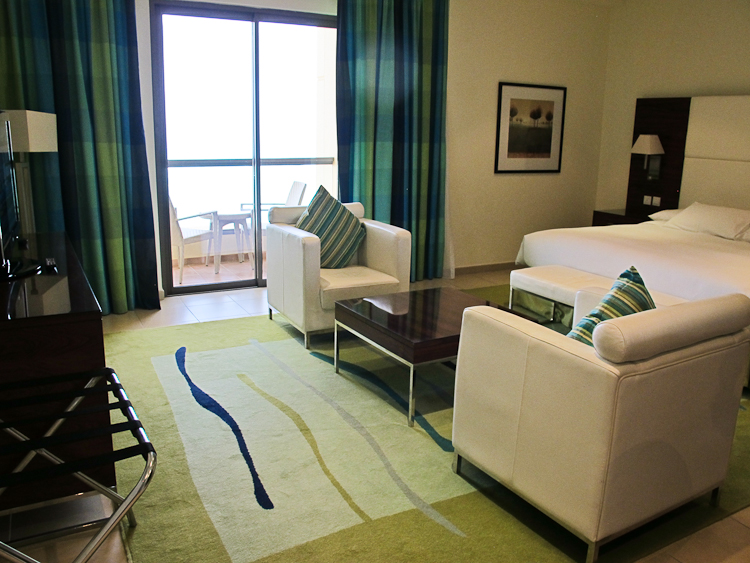 That morning we made our way to the tram, thinking 30 minutes would be enough time. The ride was quiet and I felt very awkward. Even though I was following rules regarding dress code it felt like I was breaking the law and at any second I would be yelled at for my sleeves not being long enough. 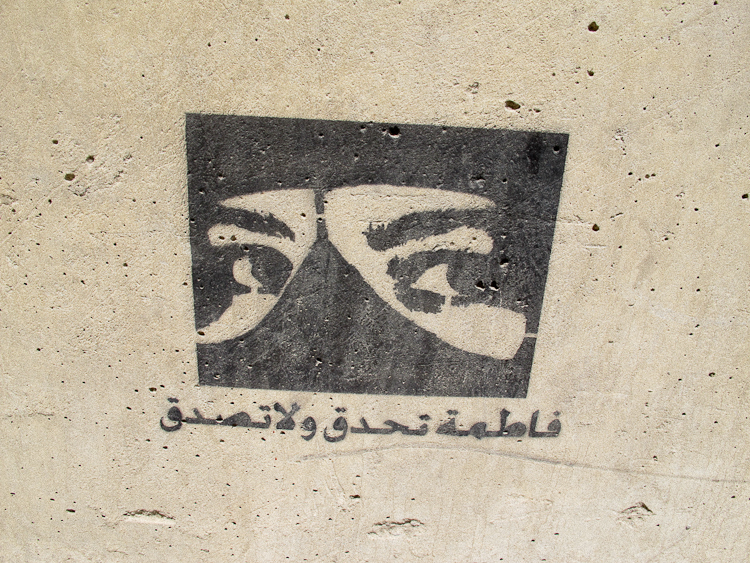 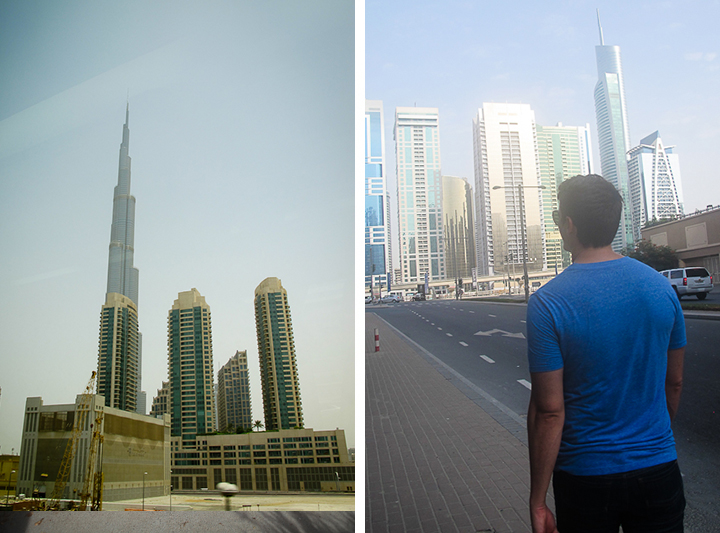 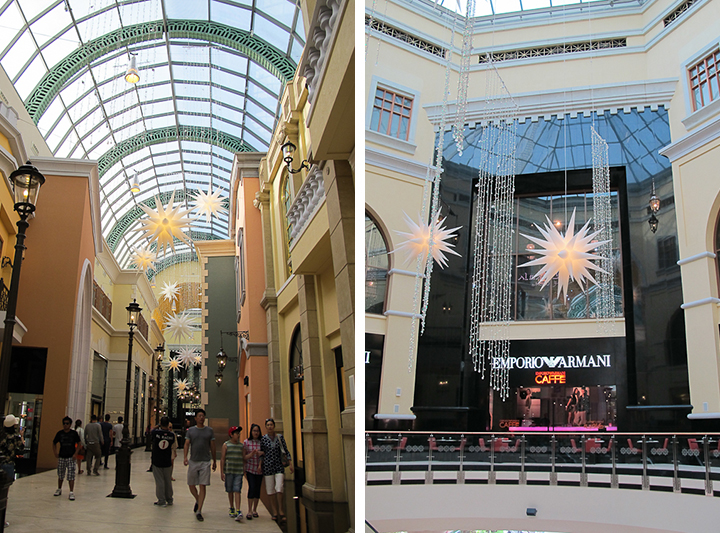 The tram ride took much longer than we expected, and we arrived 30 minutes late; luckily they still let us go up to the top. The elevator was completely enclosed and futuristic. Even though you couldn’t see out you could tell we were rocketing up fast. Unfortunately the view was cloudy and hazy. You couldn’t make out the islands which I was really bummed about. Everything looked like a toy setup, small cars and highways with small building and tiny blue pools. 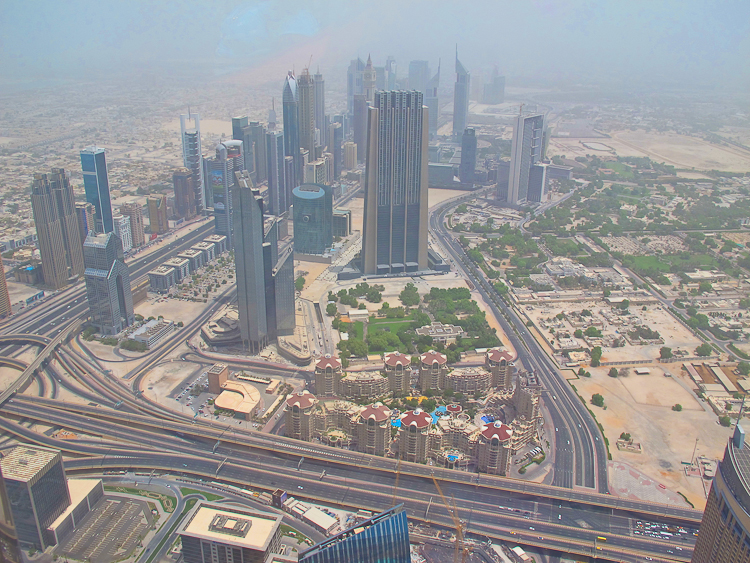 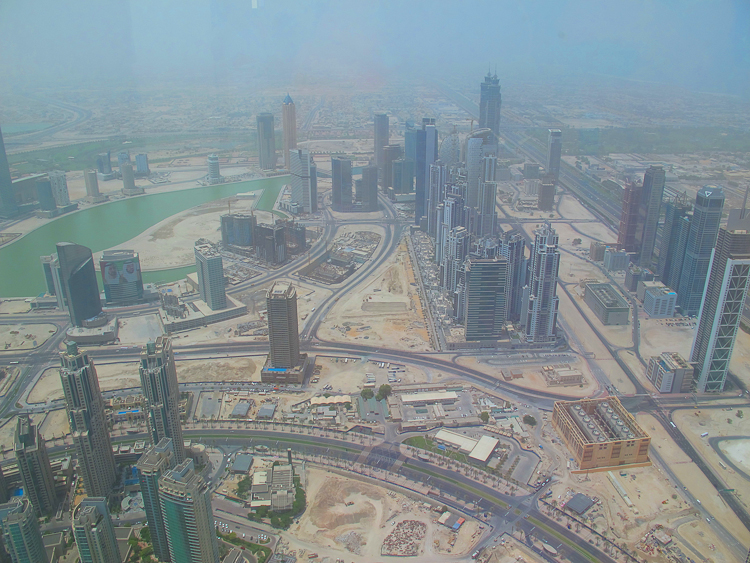 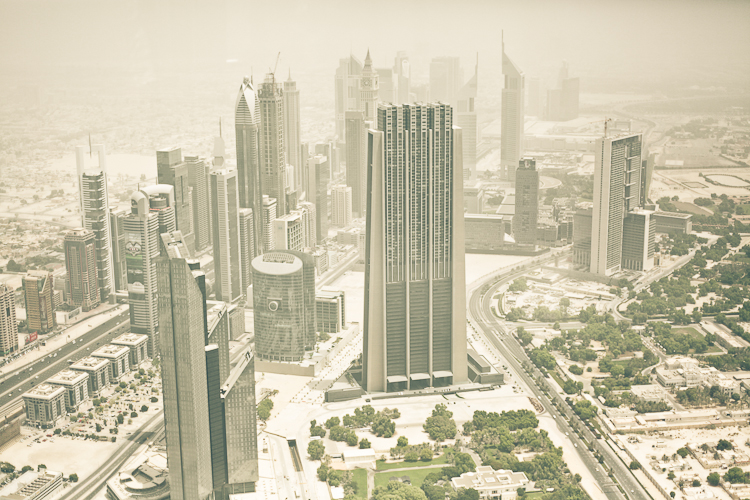 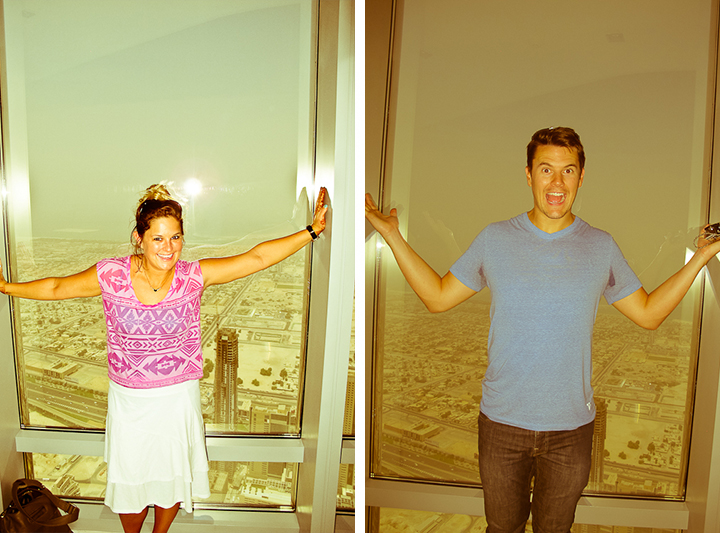 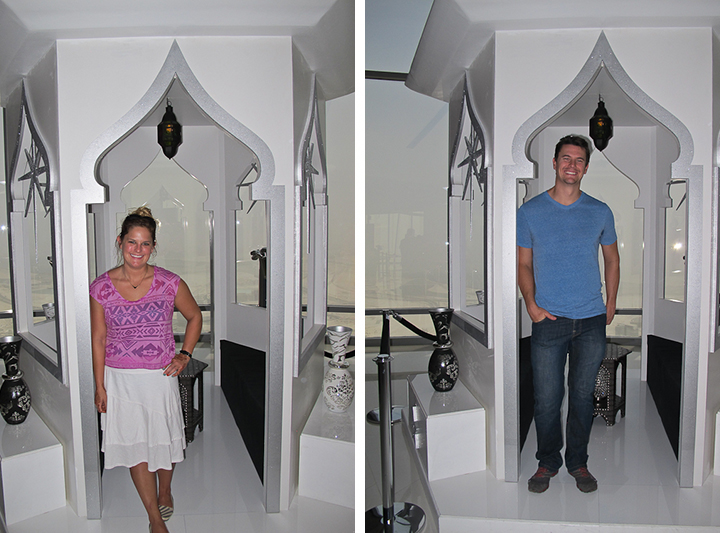 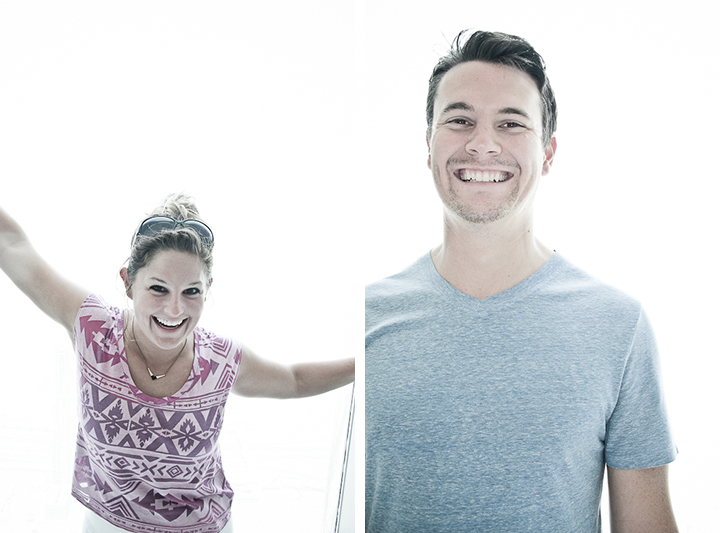 That evening our driver picked us up for the desert safari tour. Kevbot and I climbed in the back seat, and off we went hurling towards dunes. If you find yourself on a similar tour, holy crap, take your Dramamine! It was as if the driver’s job depended on one of us throwing up, and unfortunately that nominee was me. 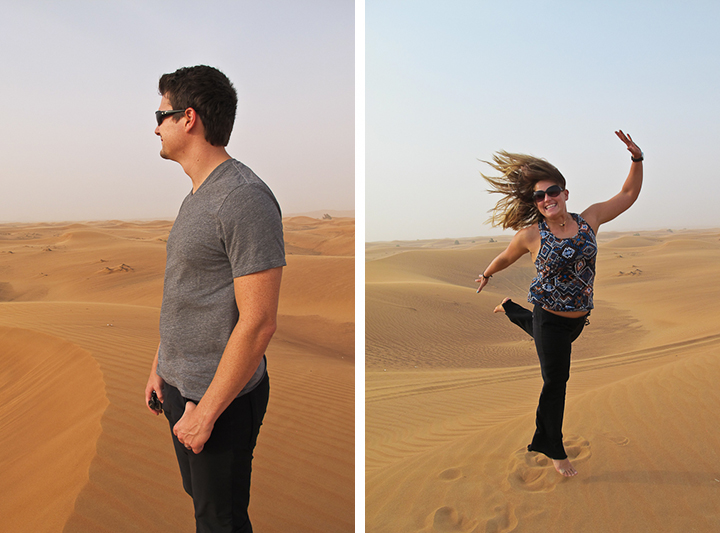 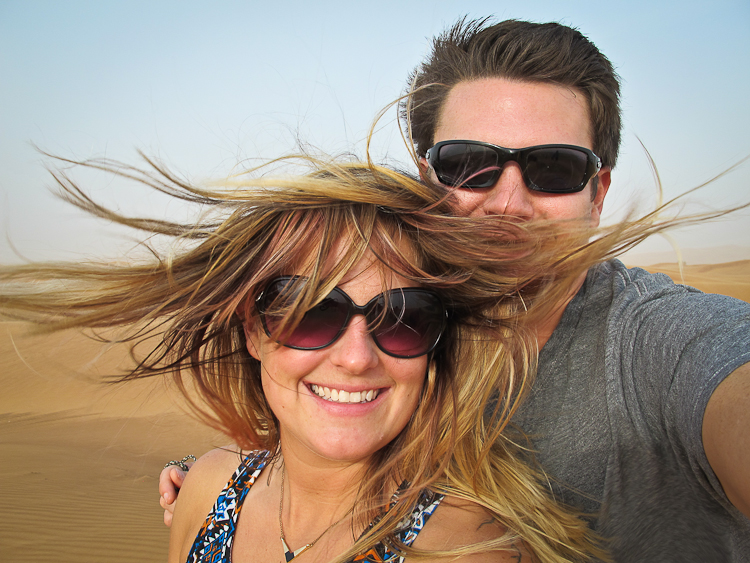 Before the roller coaster ride

No, I didn’t officially lose my lunch, but that’s probably because we were there during Ramadan which forbids food to be consumed during daily light. This is a real law; seriously, you can get a fine for eating or drinking in public. After an hour riding the dunes like a rollercoaster, I was the reason the caravan had to pull over so I could regain the color in my face. 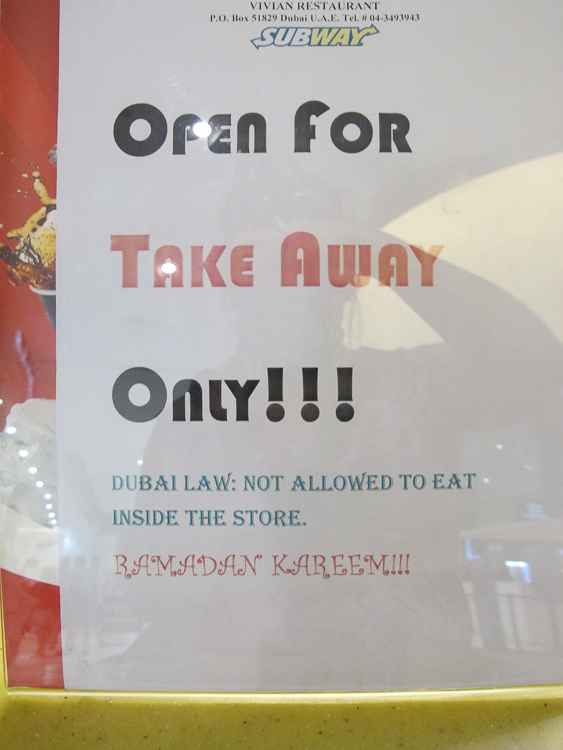 Subway was the only place open, but you had the take the food home to eat it

I was so a happy when the van finally pulled into camp. I just wanted to collapse onto the sand and let my head stop spinning. Luckily I started to feel better, and we enjoyed a lovely sunset, camel ride and Arabian dancing. Regardless of getting sick, it was one of my favorite experiences. If I had a do-over I would just double up on Dramamine and demand to sit in front. 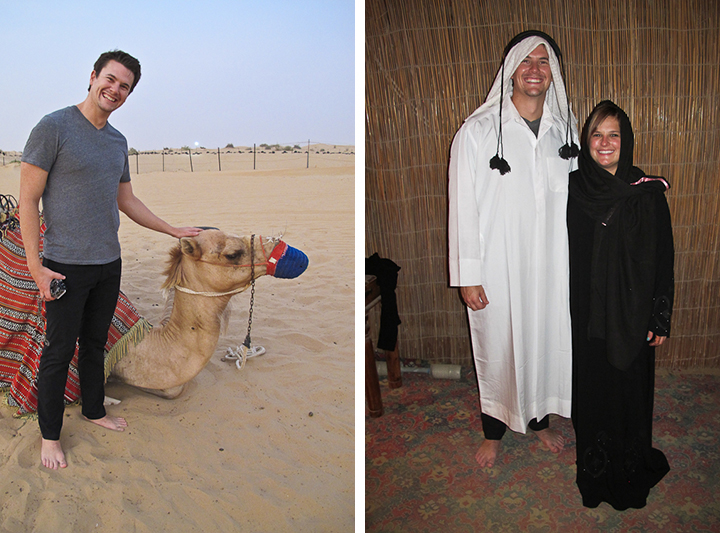 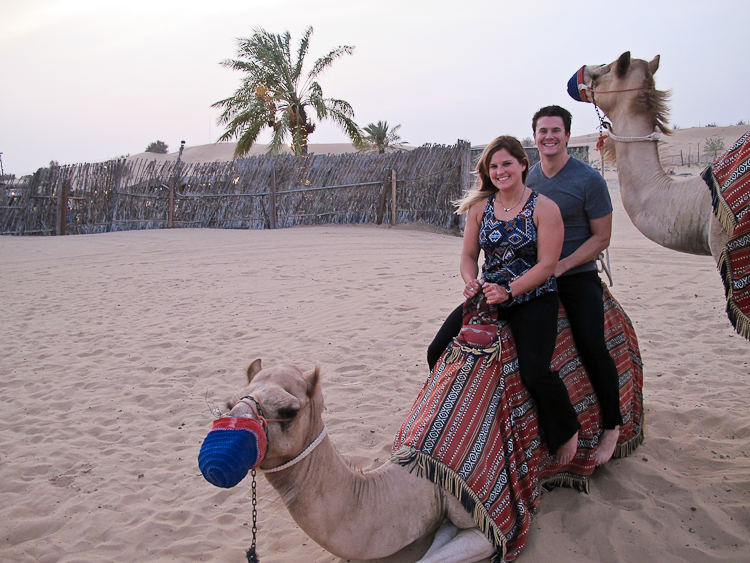 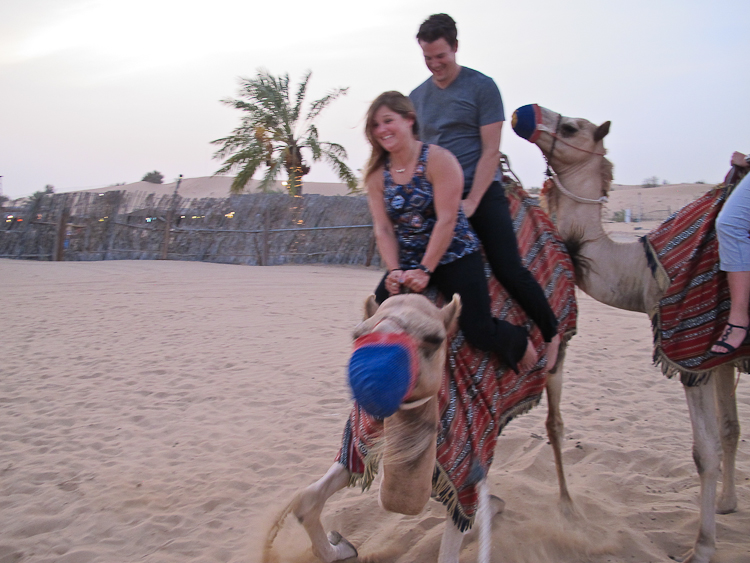 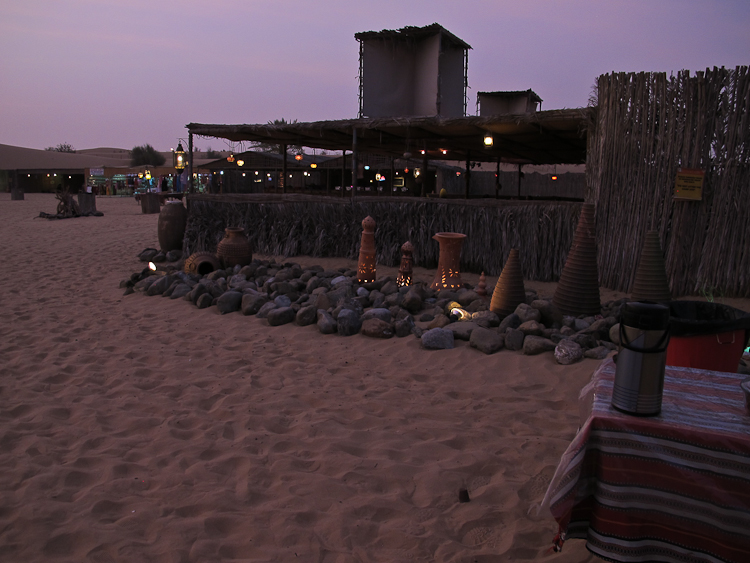 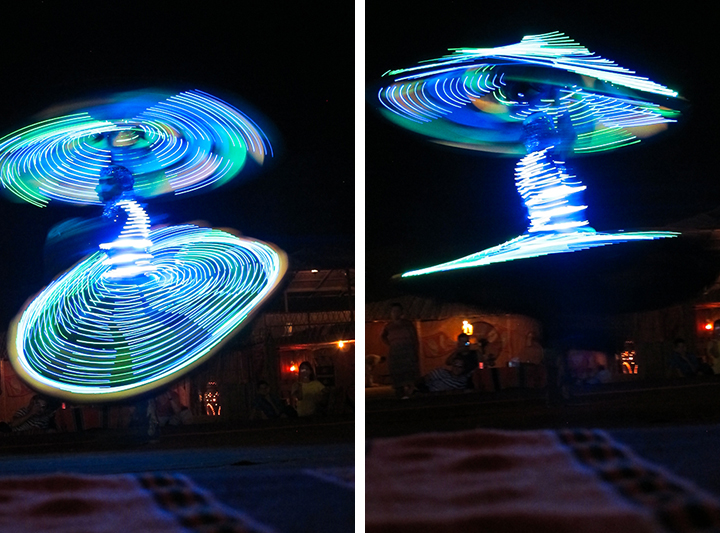 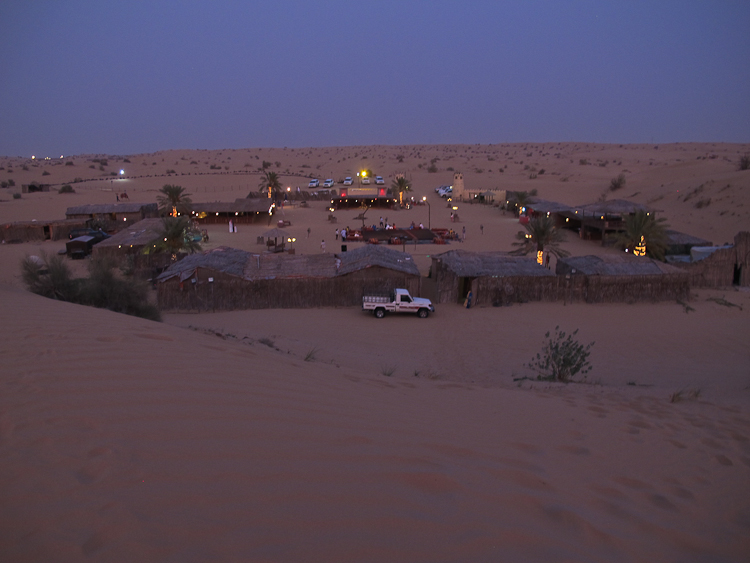 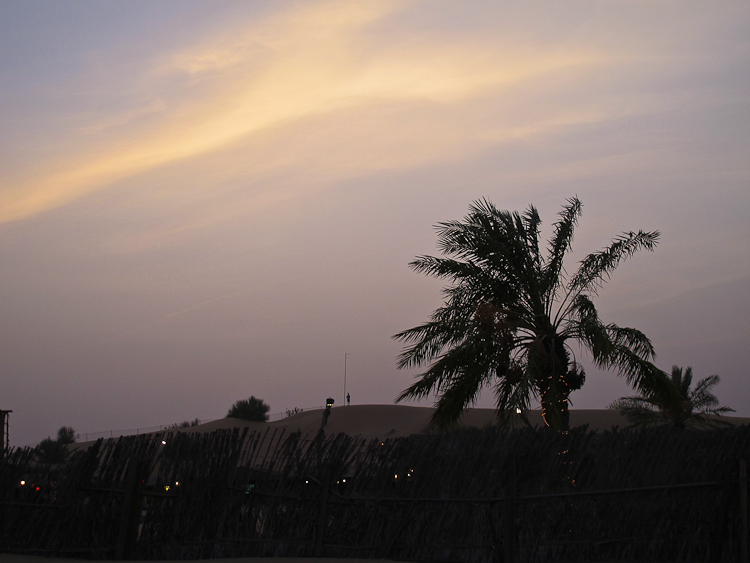 Our three days in Dubai felt like two days too many. Even still I have to give props to Dubai. They definitely figured out how to entice unsuspecting tourists to visit a spectacle of extravagance built on a place that I could only assume was the inspiration for the Red Waste in Essos. It’s the only place I’ve been that I can honestly say “one and done”. 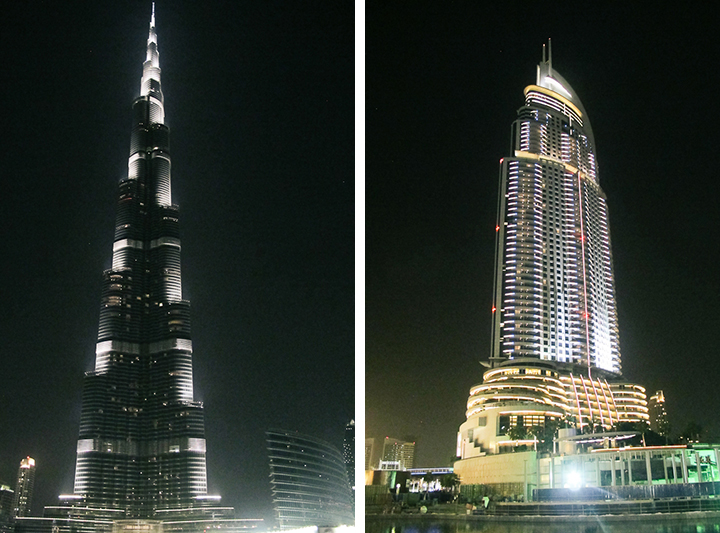 Does it ever end? This is farther east than I’ve ever been -Daenerys Targaryen