Published by K10 In Canada 3 Comments

When we first decided to add Montreal on our list of places to visit, we were concerned about crossing the boarder. Apparently it was for good reason because they definitely don’t make it easy for you! Granted it does look a little suspicious when you try to roll into Canada with a car full of your belongings, two dogs, and a plan to stay for 7 weeks. 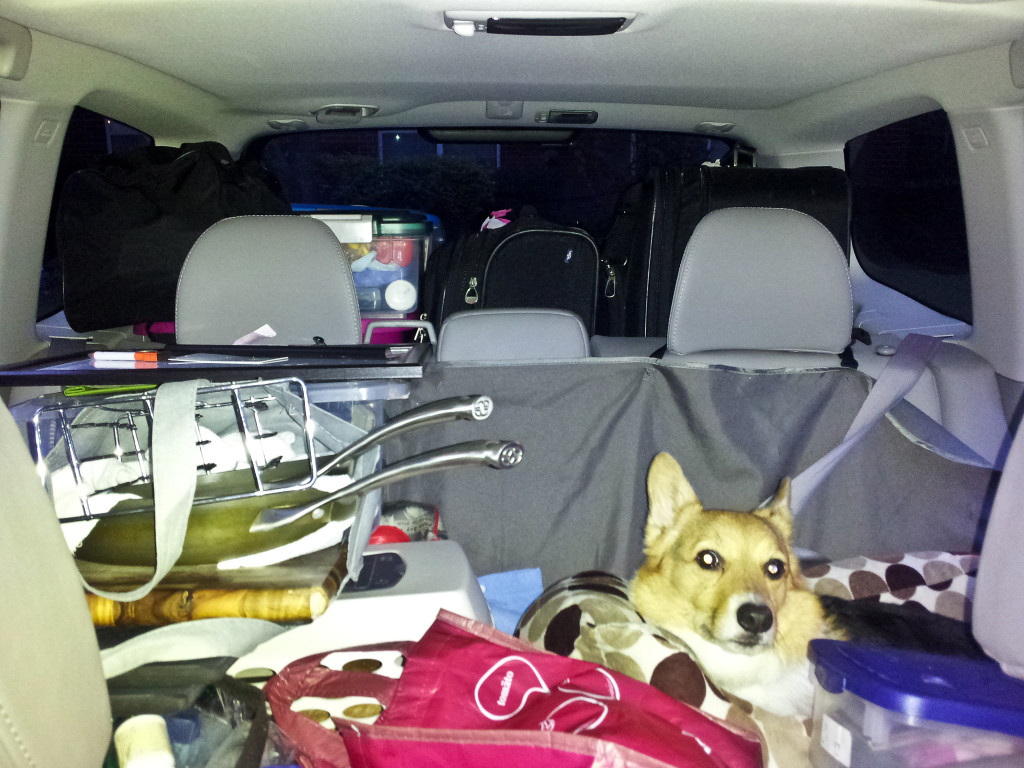 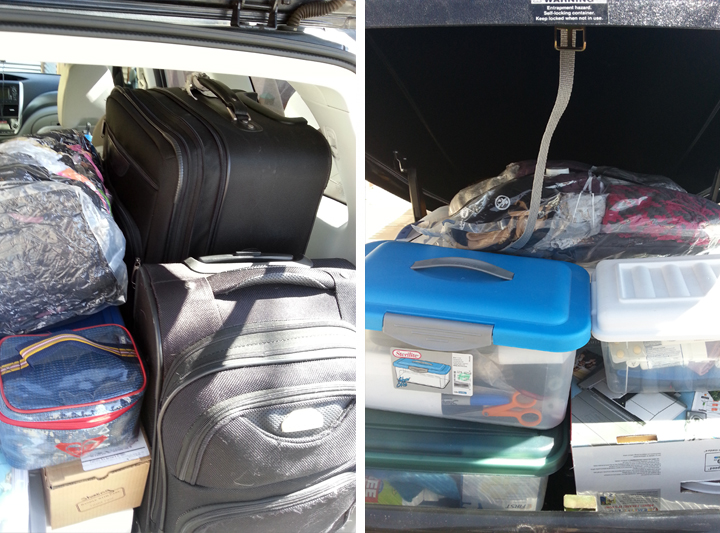 Obviously we are out of our minds because we took a gamble to enter and re-enter Canada 4 times in the last month, and it’s been an ordeal almost every time.

This is one of the 10 most used boarder crossings into Canada and the 4th busiest in New York. We arrived at the boarder around 5 pm. We waited our turn in the long line for 30 minutes before we pulled up to the guard window. He asked us how long we were planning to stay, and unfortunately he heard 2 weeks even though Kevbot said seven. That ultimately led to confusion, and a lot of back tracking with the answers that were to follow. “Seven weeks!?! That’s a long time to spend in Montreal,” he exclaimed. “Please pull into the immigration office and speak with an officer.” 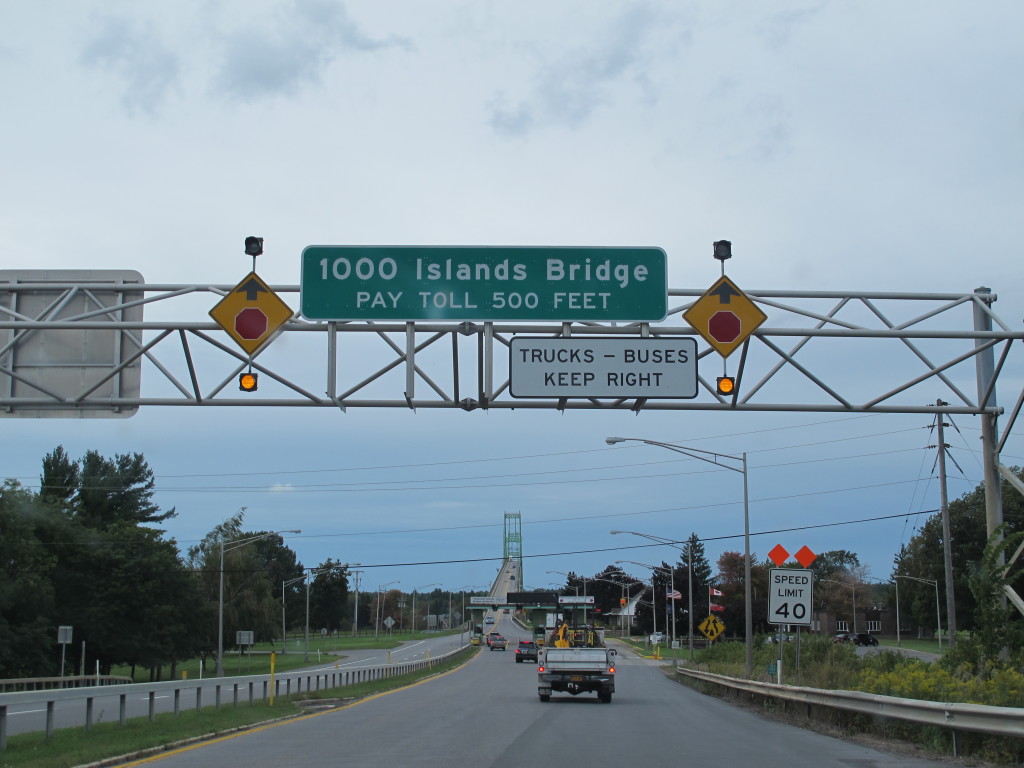 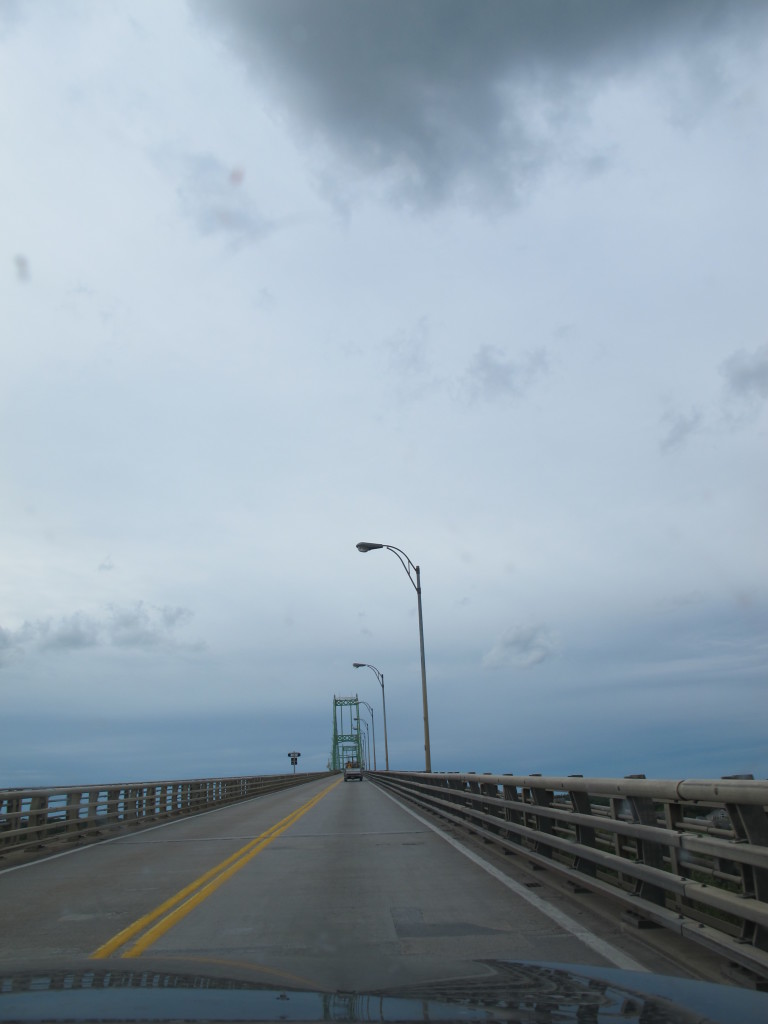 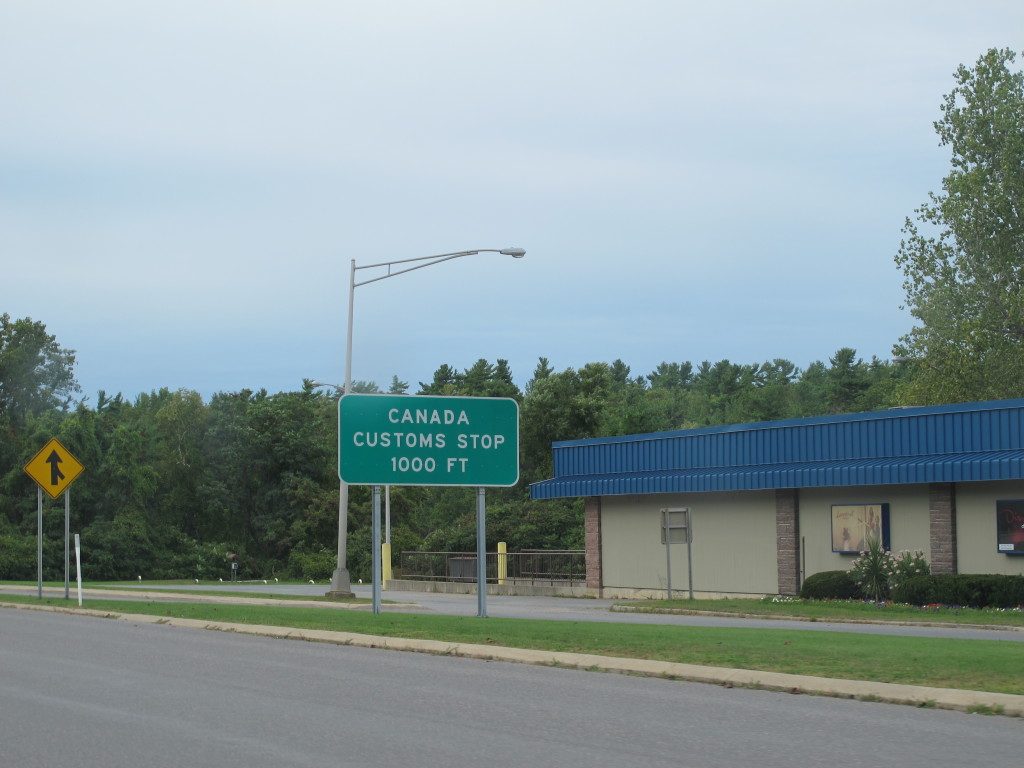 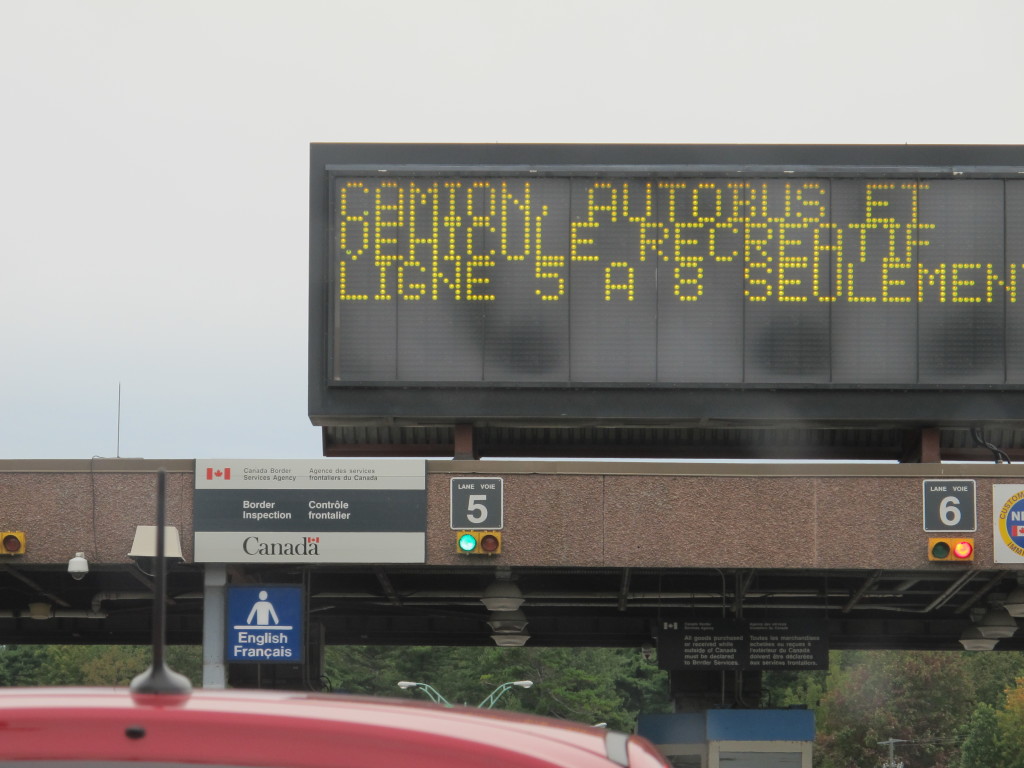 I was nervous, but acted upbeat as we sat and waited our turn. Finally a stern, young woman came to inspect our vehicle. We were instructed to stand in the grassy field with the pups while everything we owe was manhandled. Our things were torn from the perfect tetris puzzle, and thrown about on the concrete parking lot. She called over another officer as she pried and yanked at the cargo carrier on top of the car.

“Please go help her before she breaks the lock,” I frowned. Kevbot slowly approached, asking every few steps “Do you want me to open it?”

As soon as the top was open the officers took one look at the stacked tupperware and backpacks, and then back at each other. I knew the telepathic conversation they had. “Hell No! I’m not going through all that, but I will get my revenge in some way.”

“Put this all back in and meet me inside,” she said with dead eyes. “You also need to find your accommodation reservation and bring that to me.” And she turned away and left us feeling small and pathetic with all our belongings strewn about.

We waited inside for another hour. As the minutes ticked by I lost my upbeat attitude. We sat in silence and I thought it was time to start looking for a place to stay in New York. We weren’t getting through.

Finally she called us over and gave us a lecture about how we were granted papers that would allow us to stay until November 2nd, but not a day longer. I sighed in relief. It wasn’t until we unpacked all our stuff that we found that the officer had forcefully broke my special box I bought in India. 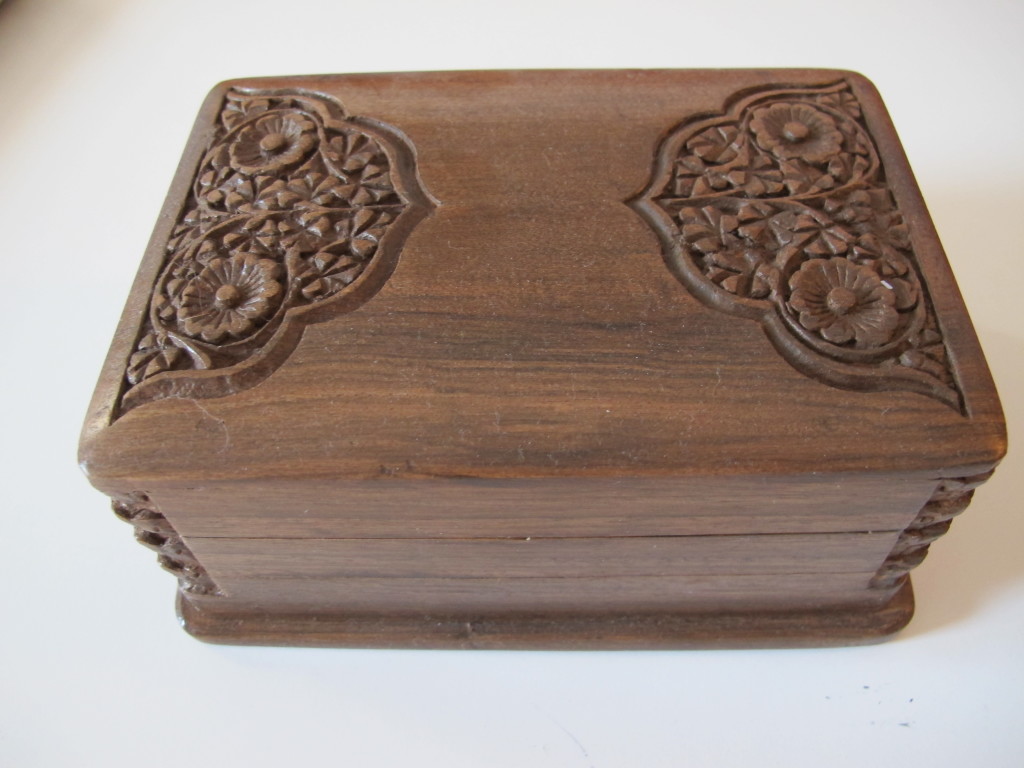 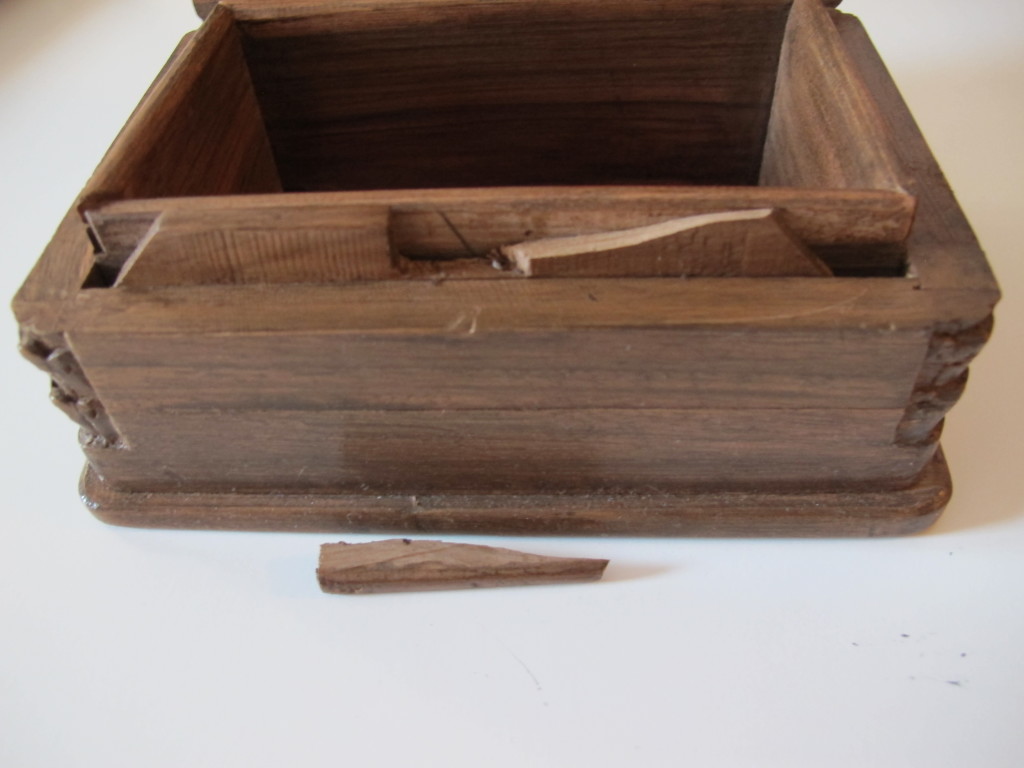 We were coming back into Canada from our camping trip in Maine around noon. This crossing is so small it surprised us when we came to the small guard shack and single crossing gate. We pulled straight up without a wait and a man came out to greet us. He asked for the dogs papers, and a few generic questions. He barely glanced at our passports and waved us on. We were lucky this time! 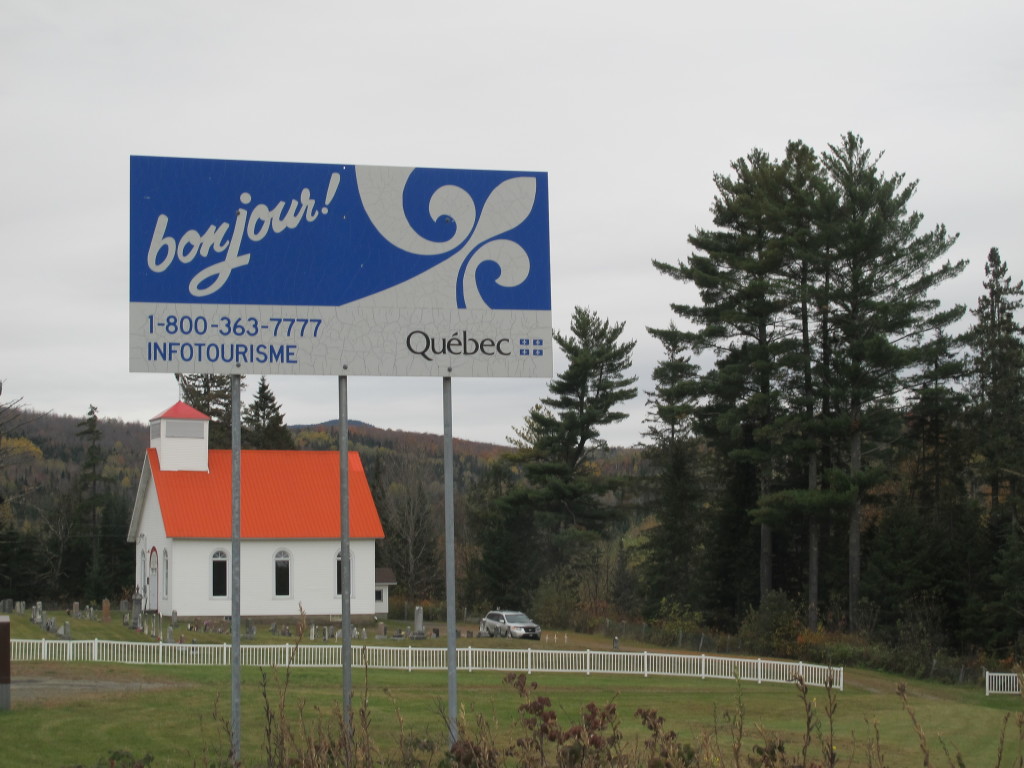 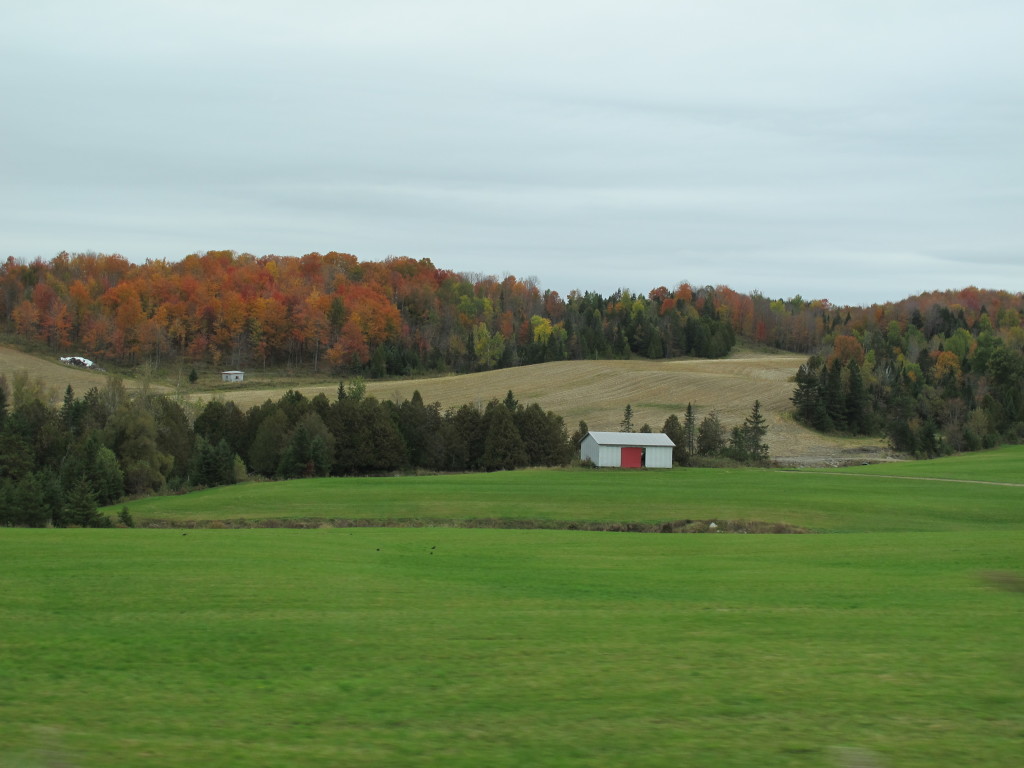 We had just picked up Sherry and Donnie from Buffalo to spend the weekend in Niagara. I figured since we only had a small amount of luggage, no pups, and we were crossing to a popular tourist destination, we’d get in lickety-split. I was wrong. The line was another long wait, and when we finally pulled up to the guard I smiled and handed over all four passports. He asked if we all had been to Canada before and instead of telling the long version, we answered a simple yes. Unfortunately he discovered the temporary pass stapled in Kevbot’s passport and it threw up red flag.

“Well we have been staying in Montreal the last 5 weeks, and were issued it the first time we entered, but we came into Buffalo to pick up our friends, who flew into from Texas, who I met 7 years ago at a photography job, and now we are visiting Niagara on the Canada side, but we will come back into the US on Tuesday, drop them off, and make our way back into Canada to stay in Montreal for 2 more weeks!” BLAH!

Seriously we had to explain all that ridiculousness! He cocked his eyebrow and told us to hold on. He picked up the phone and had a chat with someone on the other end.

He hung up the phone and began tearing the paper out. “I’m going to take this now. I’m not sure why you were even issued this because it’s only for people who pose a threat of never leaving Canada, but I’m not worried about you.”

I was still nervous because the first officer had intimidated us by saying “Do Not, for any reason, remove this pass!”

He told us we shouldn’t have a problem getting back in, and by taking it now it will save us time on the final exit. I hope he’s right. 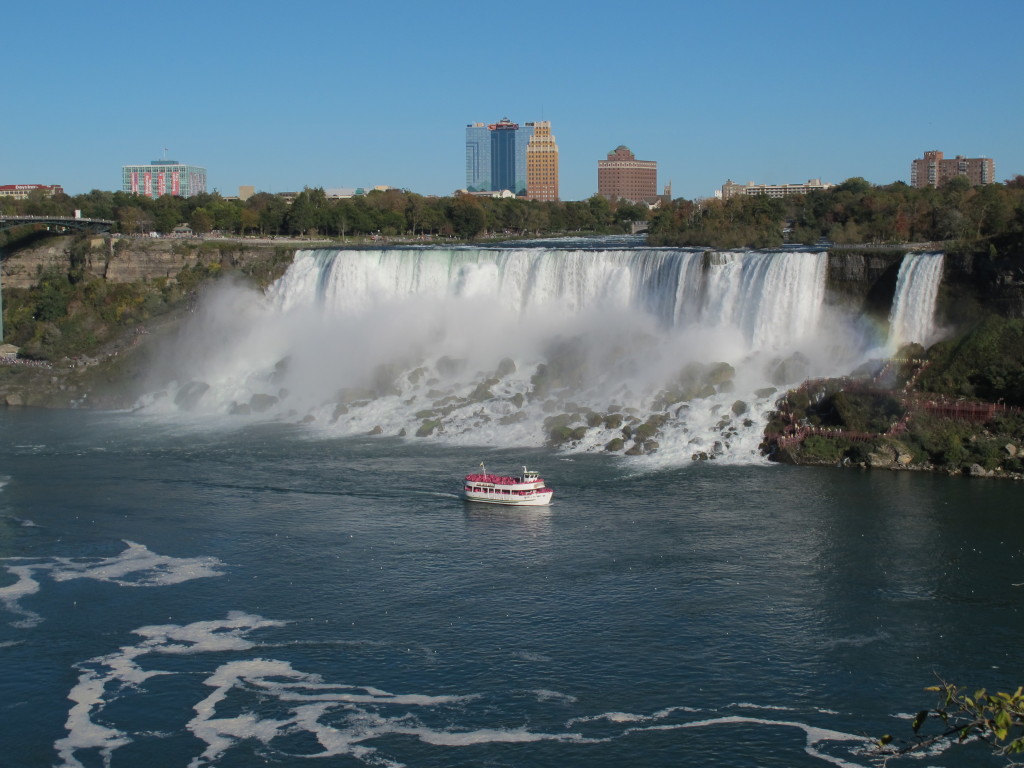 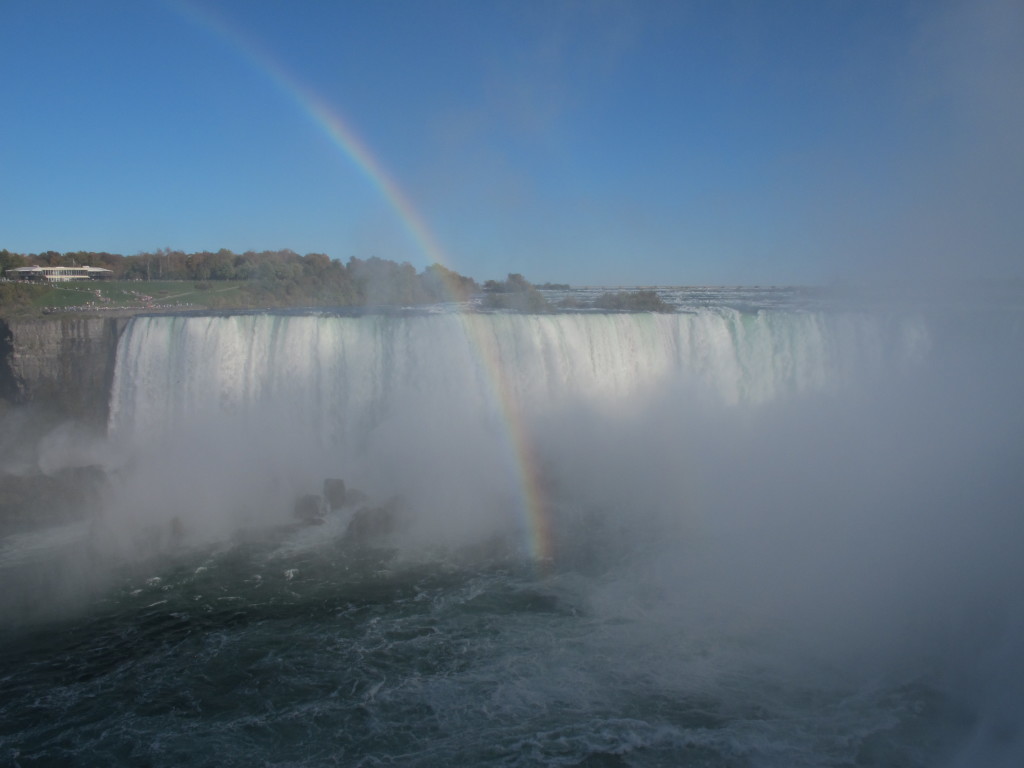 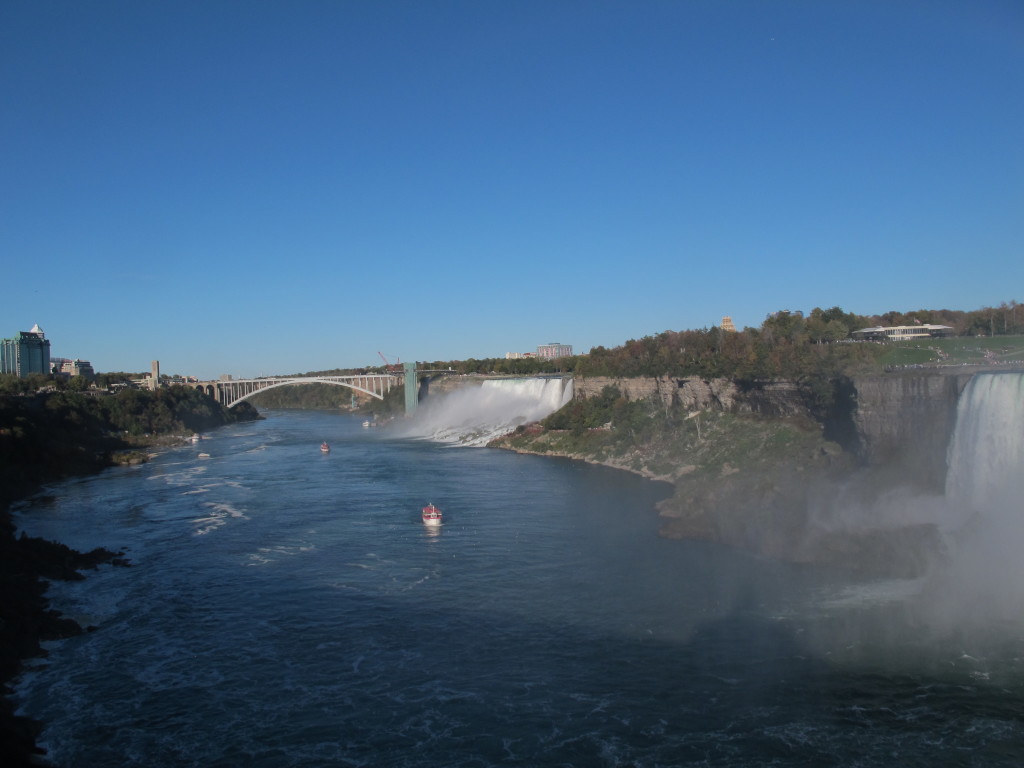 The line was relatively short, but we chose the wrong lane and watched cars on both sides wiz by.We finally pulled into the booth, and handed over the passports. He asked how long we would stay in Canada and Kevbot answered “Two more weeks.”

“Two weeks?!? That’s a long time to spend in Canada!” he answered. Seriously we got this response at seven weeks, four weeks, and two weeks. Apparently the Canadians don’t think their country is worth visiting for more than a few days.

He asked more standard questions. Do you have enough money? Will you be working in Canada? How do you have this much time off from work?

Then I guess the computer told him something after he scanned our passports, because things went down hill after that.

“How long have you been traveling?” he asked suspiciously. Uhhh god, now we have to go into the whole back story, and tell him we’ve been traveling the year and have been in Montreal for the last 5 weeks.

“Well you don’t have that much stuff for a year’s worth of travel.” Wow, that’s a first that our lack of stuff got us in trouble! “Well you just told me 2 weeks so I am thinking that you sound like liars. This all sounds very suspicious.”

Kevbot covered pretty quickly and corrected him by saying “I said 2 MORE weeks. I have to be back in Nashville after we leave on November 2nd.”

“Okay” the officer responded. “As long as you are gone by then.” And we drove on through.

We re-enter the US in two weeks. Keep your fingers crossed everything goes smoothly. 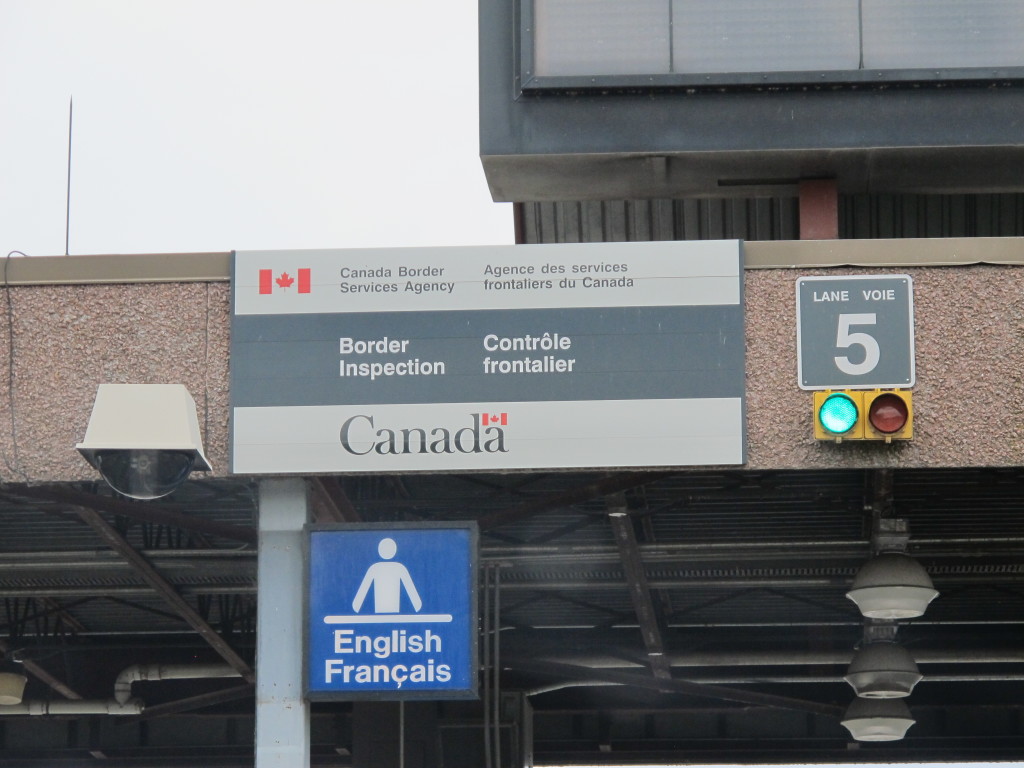 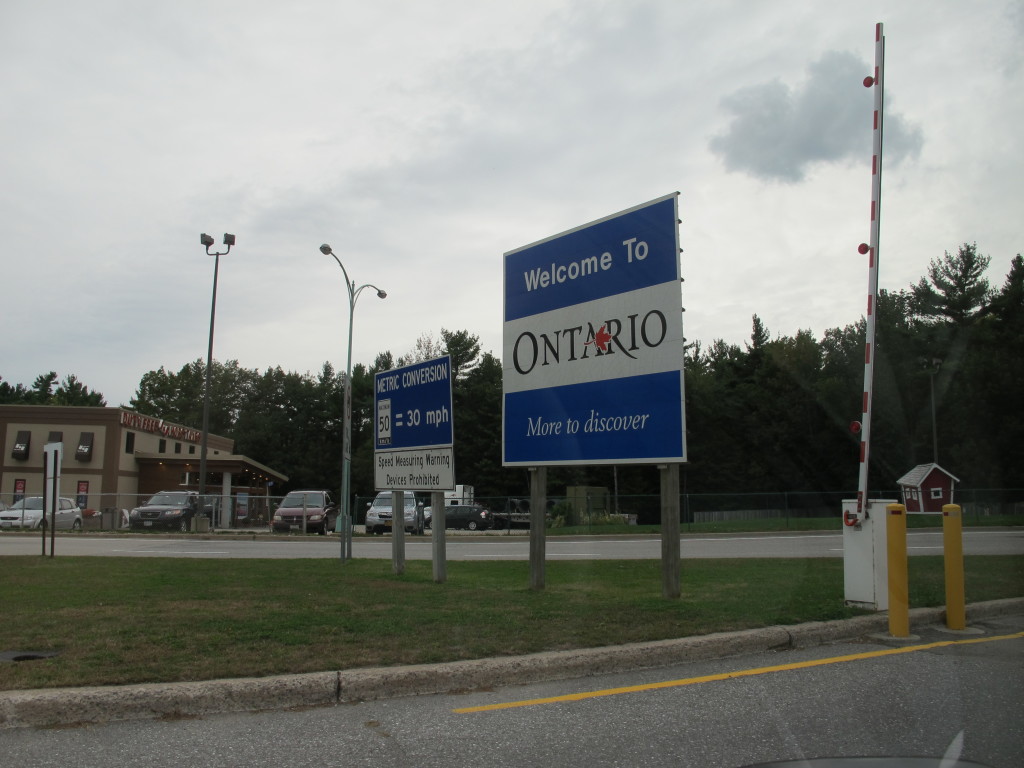